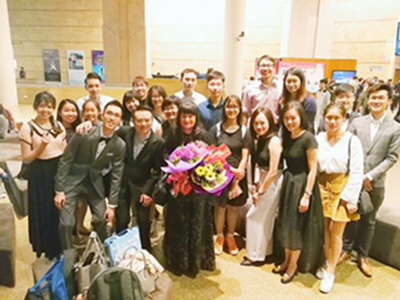 Pianist Alicja Fiderkiewicz was invited to Singapore again to perform at the Esplanade on 30/1/18.

The evening concert started with Bach’s Italian Concerto. Alicja handled the Italian Concerto expressively, especially in the second movement. It was voiced excellently with lucid independent lines...the first and last movements were technically flawless. The Presto was played agilely in a dance-like manner... unlike many pianists who might approach it at a breakneck speed which is uncharacteristic of Bach’s style.

The ten variations by Beethoven were delightful and a joy to savour...Exquisite touch and astonishingly imaginative.

The Prelude, Chorale and Fugue is a monumental work by Franck, which requires maturity and technique... Alicja’s playing radiates strength and deep awareness of the composer’s intentions. She possesses a wonderful command of the overall architecture grandeur of a large scale work.

Nowadays, it is rare to listen to the music of Paderewski on concert stage. Alicja gave us a rare treat of two beautiful works by Paderewski. The Nocturne was beautifully presented by Alicja...excellent control with subtle tempo rubato, long cantilena lines...
The Minuet was very popular with all Leschetizsky pupils, thanks to Madame Essipoff’s playing, who was also the first to play the Minuet in public. Alicja played it gracefully and charmingly, wowing the audience... reciprocated with thunderous applause.

The concert ended with a couple of works by the greatest polish composer, Chopin, also a fellow countryman of Paderewski.
The four Mazurkas Op 24 were charming, and wonderfully interpreted...The Berceuse Op 57 is a question of tone colour; therefore it is necessary to approach it through the ear and the imagination. A basso ostinato in the opening contains the tonic and dominant follows by a four bar theme that is subjected to a number of variations. Alicja played it beautifully which is akin to some of Chopin’s Nocturnes. The last item was Ballade in F minor, which is considered to be one of the finest among Chopin’s large scale works. Alicja was imaginative with the flexible main subject, which is calm...not easy to maintain the floating musical shape and intensity for many pianists...she was able to play the strenuous coda at ease...ending with four emphatic chords...

After a wonderful finale, the audience’s clamouring for more was generously reciprocated. Szymanowski’s Prelude and Schumann’s Traumerei were encore pieces, especially the latter, was befitting to send us to our own dreamland.

View the embedded image gallery online at:
http://alicjafiderkiewicz.com/reviews#sigProId5335794c1f
(click on an mage to see a larger version) 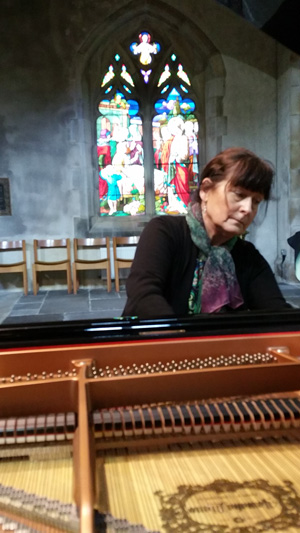 Pianist Alicja Fiderkiewicz's Recital at St. Andrew's Church, Aysgarth, on May 13, journeyed from Baroque, through Romantic, to Impressionist styles, with equal ease.

J.S.Bach's Italian Concerto lost nothing of its Baroque flavour on the superb modern grand piano. The outer movements sparkled, whilst the Andante sang with grace and clarity.

Then the audience were entranced by Alicja's subtle tone colours in the three Intermezzi, Opus 117, by Brahms.

In the gigantic Prelude, Choral and Fugue, written for piano by organist César Franck, she conveyed both the grandeur and the delicacy of that instrument, on the piano.

The "Estampes " of Debussy provided an intimate antidote to the vastness of the Franck.

Alicja's affinity with Chopin was revealed in her splendid performances of his Nocturnes, Opus 48, and Fantasie in F minor, Opus 49, which she played with much passion.

A dramatic ending to a most enjoyable evening.

An evening of all Chopin can be formidable and challenging for most pianists. We have heard so many hackneyed works of Chopin by numerous pianists which can often be predictable and stale. However, in the hands of pianist Alicja Fiderkiewicz, we were treated to an evening of refreshing and engaging performance. In short, her renditions were artful and thoughtful.

The recital programme included 2 nocturnes op 48, Berceuse op 57, Ballade no 3 op 47, an arrangement of the piano concerto no 1 Romanza by Alicja and others.

The one-hour recital was not enough to satisfy the listeners' appetite, so they were treated to two encores. The first was the popular etude op 25 no 1, better known as the "Aeolian harp" by Chopin. The evening rounded off with a miniature work of Chopin yet again, the prelude in A major, op 28 no 7, an appropriate finale to send the audience home with sweet dreams.
VENUE: Forte Academy of Music Sdn Bhd JB Malaysia
Time:7:30pm
DATE: 25/4/17

Programme included Schubert's last monumental piano sonata D960. Rendition of the sonata was thoughtful and soulful. Debussy's Estampes were colourful and unrestrained in its interpretation. The romantic spirit and passion was evident in Brahms' Op 117. Captivating and yearning. Chopin's Barcarolle was imaginative showing mature insight. Highlight of the evening was Chopin's ballade Op 47. It was fully engaging and authoritative. Thunderous applause... asking for more. Pianist Alicja Fiderkiewicz did not disappoint the audience... All were sent home satisfied with three lovely encores starting with Chopin's Étude in A flat Op 25 No 1 and Prelude in A major Op 28 No 7. The last encore was Bach's Prelude in C major BWV 846...Beautiful and enchanting.

A romantic piano music moment on a snowy Sunday evening

Kemijärvi Music Union and Kemijärvi Culture Office have once again, to their credit, brought a magnificent pianist to perform this far north.

Before coming to Lapland, Alicja Fiderkiewicz had played a concert in Helsinki and also held a master course in Sibelius Akatemia.

The concert started with the massive Schubert Sonata no.21, D.960, which has four movements in distinctly different styles. In the first movement, Fiderkiewicz succeeded in bringing forward the different themes. I especially loved the Andante sostenuto part, where the pianist’s tone was in a class of its own; how many fine nuances can one find in a grand piano.

In the only slightly slower movement of the sonata, the musical outline and the peacefulness of the musical phrases made for fine listening.

The first part of the concert consisted of this particularly challenging sonata and it was a very good start to the whole event.

After the interval we first heard Papillons op.2 by Schumann, a piece which combines a distinctive set of different thematic elements in the composer’s characteristic style, all brought forth by the pianist in quite an impressive manner.

Following this, our ears had a chance to rest for a bit with three of Chopin’s Nocturnes, known to everyone. Fiderkiewicz performed an introspective, stylish and suitably powerful version, while avoiding oversentimentality. Once again I would like to point out how did the pianist conjure such a multitude of fine nuances in the Chopin material. The concert ended with Barcarolle in F sharp major, op.60, by the same composer, which, in its rhythm and forte dynamics, made a nice contrast against the previous Nocturnes.

For the first encore we heard J.S. Bach’s Prelude in C major, which the pianist dedicated, in front of the audience, to the memory of the victims of the Paris attacks. A brief silence followed the piece, the audience paying their respects to the victims of violence. For the second encore, trying to lighten up the atmosphere, Fiderkiewicz played a little mazurka by Sibelius, sitting by the edge of the piano and wondering ’’do I remember this one?’’ to a laughing audience.

The big sound of the grand piano did come through just about fairly in the hall of the Cultural Centre, noted for its complete lack of echo. It would be nice to see a day when such great artists would be able to perform in Kemijärvi with the appropriate acoustics - changing the side curtains to a harder material would make the hall much more suitable for music performances, otherwise the hall is a fine and intimate venue. One would only wish that concerts of such quality would have a bigger audience.

It was the joy of a Sunday night to get to listen to such a great piano artist!

“Her flair for communication showed throughout Mozart’s Concerto K467, in the tonal beauty of the slow movement, and even more in her imaginative shaping of passage work in the outer ones.”

“It was a mature, finely controlled interpretation she gave, with no panic and no exaggerations… beautifully phrased, well coloured and expressive within its early classical limits.”

“Her playing is distinguished by her innate sense of style and immaculate articulation. These qualities combine with true musicianship to give performances of uncommon interest, Her interpretation of Beethoven’s “Pathetique” Sonata was masterly; the strength which underlies her playing is always finely controlled and her phrasing delineates the development of the music. The slow movement especially, was most beautifully played with a sober elegance and a wealth of controlled feeling.”

“(Alicja Fiderkiewicz) …demonstrated the truth of the great Rubinstein’s saying – that ‘only Poles can play Chopin properly’. In the three pieces: Fantasie in F minor, Nocturne in E flat major and the Scherzo in E major, her playing was brilliant, with changes of tone and tempo that vividly interpreted and illuminated this endlessly fascinating and intriguing music”.

“The exceptionally talented and interesting pianist, Alicja Fiderkiewicz, gave a performance of Grieg’s Concerto in which she showed a masculine strength of attack and a feminine delicacy in the lyrical passages. There was no condescension in her approach and this fine piece emerged fresh and stimulating.”

“In her approach to Mozart: nothing “prettified,” nothing out of scale, but with the awareness that this is “big” music nevertheless. This is what removes her from the category of talented, which is well filled, to that of a nascent artist, altogether rarer. In the now popular Andante (“Elvira Madigan” and all that), she showed that artistry in remarkably mature fashion by her refusal to sentimentalise the melodic line.”

“(Hindemith's) Sonata No.3 (had) none of the pedagogic dryness often suitable for this composer but strong, round-tone sympathy – without effusiveness – roomy, but not costive, speeds, generous, yet judicious, pedalling, and power without clatter for the big Fugal Finale”.

“…quite delightful and was well worthy of the several curtain calls she received at the end of her performance. Listening to her, one could well appreciate why she is already gaining an international reputation.
Her programme reflected her international background, not the least Poland. The first half consisted entirely of Schubert’s ‘Sonata in B flat major, D.960’. The second part consisted of four shorter pieces, The ‘Sonata, Opus 1’ by Berg and, to conclude, three of Chopin’s works: two Nocturnes and the ‘Fantasie in F minor, Opus 49’. The whole recital was performed by a pianist engrossed in her music.”

“…the quality of imagination is given to a rare few (pianists). It was evident throughout the whole of Miss Fiderkiewicz’s recital… (to each work played) she brought her own individuality and intensity of expression.”