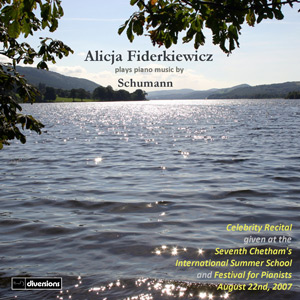 This disc exemplifies the richness on offer at Chetham’s International Summer, School and Festival for Pianists in 2007.

And what musicmaking! … Technically she is superb; but more than that, she gets to the heart of the composer in the two major works here.

For many composers the term “Humoreske”, however spelt, denotes a short, light composition. Schumann’s, however, is a major work, more than 25 minutes long and in five large paragraphs and eleven individual movements: another Carnaval, C major Fantasy or Davidsbundlertanze,

Like most, arguably all, of Schumann’s principal piano compositions it contrasts his Florestan and Eusebius sides. So does – and perhaps even more so – the Opus 11 Sonata The performance is full of drama, thrust and character.

All in all, the disc is highly recommendable, not just as a memento of a great occasion, and not just to Schumann aficionados but to all lovers of fine piano playing.

Throughout the recital Fiderkiewicz maintains a lovely tonal sheen, a fine rhythmic clarity, while al­ways differentiating well between the opposing characters of Eusebius and Florestan.