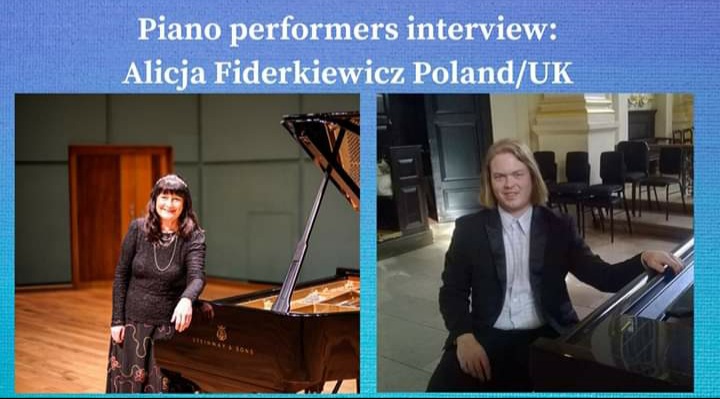 CARLISLE has its own international jet-setting famous musician with four CDs to her name.

And while Alicja Fiderkiewicz doesn’t fit the normal profile of a rock star, she regularly tours the world performing in concert halls.

Warsaw-born Alicja is a concert pianist who has lived in Carlisle since 1983 from where she regularly heads off to top venues all around the world.

“I started messing about on the piano from the age of three. I was promising at that age but they left me alone to do what I wanted to do. Then I began regular lessons when I was six,” said Alicja.

“From a very early age I used to be found by my parents with my ear glued to the radio, especially Chopin and piano music.”

By the time she was seven Alicja had been entered into a school of music in Warsaw to be taught by a professor, before an even bigger move two years later when the family moved to Moscow.

“We were in Warsaw until I was eight or nine, then I went to Moscow. I studied there for a few years at the Central School of Music. I went with my family because my father was in the diplomatic service as a naval attache,” she said.

“Warsaw was very different to Moscow. I was a child prodigy in Warsaw but a child nobody in Moscow!”

She spent six years there before returning to Poland, winning competitions and scholarships and playing at major venues, including Chopin’s birthplace and the Warsaw Philharmonic Hall, before moving to Manchester in 1971 to continue her studies with Polish professor Ryszard Bakst.

“Manchester was a shock to the system. Moscow had regular concerts with the biggest names, and the same in Warsaw. Manchester in those days wasn’t the place it is now,” said Alicja.

“It is wonderful now with places like the Bridgewater Hall, and it is a very important musical centre. But then I was used to going to concert halls every week, and in Manchester there was nothing there. They didn’t have the biggest names coming as Russia was still not letting them out much into the west!”

And it was while living in England that she met David Murray, from Carlisle. They married, and she has been based in Carlisle ever since.

In the last few months Alicja has been to America, Spain twice, Singapore, Malaysia, Japan, Cyprus, Italy and Poland, where she returned home to give masterclasses.

“You go to some places and it is airport, hotel, concert hall, hotel, airport and back home,” said Alicja.

“But you really see some of the country when you go to Asia. Although they work really hard they are a really hospitable people. They take time to show you the country, they are very friendly.”

She once played at the world famous La Scala opera house in Milan: “I did a Mozart concert with the La Scala orchestra. That was probably the most amazing and beautiful place I have played at. I prefer old halls, they are more traditional, but the newer ones have better dressing rooms and acoustics. The dressing room at La Scala was not very nice, I thought they would be fantastic, but maybe they have improved it!”

Alicja’s favourite composer is Bach, although Chopin isn’t far behind. But she is saddened that not as many youngsters are following in the same path.

“Kids are not as motivated to play and practice. There is TV, computers, the internet... I am extremely happy that I am at the end of my career rather than the beginning. Starting now is very hard. There are so many cuts in music and in the arts, there is very little money available. I feel sorry for them,” said Alicja.

Next Thursday she was planning to give a recital in St Cuthbert’s for the Carlisle Music Society – which this week was postponed due to the Coronavirus – and dedicating the recital to the memory of her friend, Don McDowall, a former chief planning officer for Carlisle City Council, who died on March 20 last year.

“Don was a good friend. I was introduced to him by another friend one evening at a Thursday Quiz Night at the Crown and Thistle in Stanwix. He was the brains behind our team. He loved classical music. I thought I would pay tribute to him by dedicating the recital in his memory,” said Alicja.

And there is a reason for Alicja, despite all her experience, to feel nervous about performing at the recital, when it does go ahead.

“There is a Scottish composer called John McLeod who write Hebridean Dances. I am playing it at the recital. He is in his 80s now, but he is coming down from Edinburgh to the concert. I am terrified!”

The recital was due to feature works by Bach, Beethoven, Schumann, Chopin and John McLeod.